Why Are so many people still playing Counter-Strike? Surely the boat sailed on that old relic many, many moons ago? World War II is where the future's at. (Er, if you see what I mean.) Battlefield 1942 is easily the best multiplayer fragfest currently doing the rounds, especially now that the lag problems have been sorted out. Publisher Electronic Arts and developer Digital Illusions still seem convinced at least, hence this second add-on pack for the superlative shooter, due out later this Autumn.

Secret Weapons Of World War II, apart from being one of the more unwieldy names of late, throws over a dozen new bits and pieces into the fray - from flying wings to super tanks to - get this -rocket-powered jet packs!

What we've done in Secret Weapons is to gear the levels more towards combat and larger, focused encounters, says Armando Marini, creative lead at Digital Illusions Canada. If you compare the new weapons to those in the original game, they're almost powerful enough to turn the tide of a battle. For instance, early on in the project we used El Alamein as a test bed. When we completed the Hortons (a powerful fighter plane equipped with a 30mm gun), it really felt like the Germans had this invincible war machine.'

Fortunately these new weapons will only appear in the new maps included in the add-on pack, maps such as Eagle's Nest, a version of the raid on the infamous German mountain fortress. The nature of the objectives in the game has also changed. It's no longer just about holding territory - each side will now have specific objectives to achieve in each level, more in the vein of multiplayer Wolfenstein.

In the Eagle's Nest, the Allies begin at the base of a mountain road,' explains Marini. The Allies have to reach several points along the way up, then get to the Eagle's Nest, break through an armoured door and destroy a safe containing classified documents. Being part of this mission is a lesson in defense and diversionary tactics. It puts the game in a whole new light.

Such specified gameplay requires tightly focussed teamplay to work correctly of course, and to that end the single-player game is getting a significant Al overhaul. Marini claims that the team has had much more time to develop the bot Al this time round, making for a more satisfying offline experience. 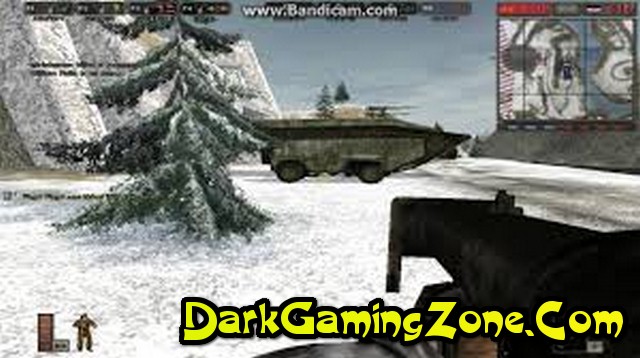 So, will the new super' weapons enhance BF1942's reputation, or just turn it into a novelty-packed curio? Naturally Marini is upbeat: I think the focus on concentrating the battles will draw more people into trying the game. Secret Weapons is taking the best that Battlefield has to offer and building upon that. We analyzed every aspect of the original game and think we've raised the bar a little higher.

With jet-packs, rocket planes and guided missiles buzzing around in the mix, it's certainly going to raise the bar for craziness in the game, which can only lead to good things. There's only so much longer the world's Counter-Strike fans can keep their heads in the dust.