A downloadable game for Windows

In 1999, Michael Wilson (founder of NO2 Games and more recently Ponywolf) built his first game with his college roommate, Ed Brown (of Popcap, Casual Labs and creator of the wonderful Paint it Back.) They called it Miniverse, an arcade-style miniature golf simulation featuring an isometric user perspective, 3D rendered scrolling play-fields, and an advanced (for its time) physics engine.

The conceit was that the planets of Miniverse have been terraformed into challenging courses. Imagining a universe of lush worlds lovingly adapted into the most challenging miniature golf courses ever.

It went on to sell hundreds of thousands of copies under various names (Minigolf Master, eGames Minigolf, Mini Golf 2) and was a staple of the compilation CD-ROMs that lined the isles of Frys, Circuit City and Walmart in the early 2000s.

Every now and again I get emails asking where to get a copy for nostalgia's sake and itch.io seems like the right place for it.

So, love it or not. Here's a working copy of Miniverse Minigolf. 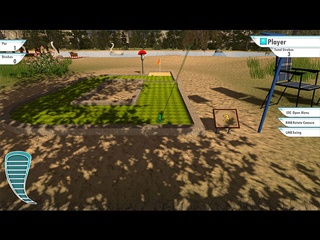 I'd be curious if you could gather copies of Bowling Mania and Let's Go Fishing as well..I had them years ago, in a case with a download of Miniverse Minigolf as well on a 'Greatest Hits' CD.

I think I could. I always thought Bowling Mania would make for a good mobile game, but never got around to porting it.

That's a good question. There is, but I'll have to go digging to find it.
I wrote that song in the Summer of 1999 using samples from NASA recordings of one of the Apollo launches. If I can find it, I'll post it here.

You weren't able to find it right? It was an awesome little track! I posted the song to youtube with a reference to Bart Howard and Kaye Ballard's 'Fly me to the Moon' a while back and people were happy to have found it after all these years:

Wow that's great. Yeah, I could not find the original. It was a combination of FruityLoops and ACID Pro and it's probably on a CD somewhere.
Thanks for the memories!

Wow! This is great. Lots of good nostalgic vibes here and it ran perfectly for me.
@NinjasSciborg I didn't see a way to get to 1080p, perhaps the youtuber upsacled the video?

Hello. Do you know of a way of playing it in higher resolutions? I remember seeing footage on Youtube of someone playing it at 1080p. Also, thanks a million for bringing this back. I was disappointed when I couldn't get my old copy to work on Windows 7 or 10. My siblings and I grew up playing this and loved it.

Thanks to everyone who pointed out issues. I was able to get pretty much everything working, but again YMMV so give it a download and make sure it works for you if you are planning on supporting it.

So glad to find this game again after so many years! As silly as it sounds, as a kid I used to boot this game up just to appreciate its environments and sound design. It may not be a big deal these days, but back then ambient sounds were pretty rare (for the games I played anyway) and really made this game stand out in memory. The sci-fi atmosphere also added to the experience, and I'm sure this game at least partially shaped my interests today. So once again, thanks for uploading this, it actually means a lot!

Thanks! I do get email all the time from people who remember playing the game as kids. Ed and I weren’t much older when me made it, a few years out of college at most.

I asked if this was a full version of the original miniverse game. You replied that it was. It is not. There is only 4 holes for each type of playing field. I expect it is no use to ask for my money back.

I have the same problem here,have you found a way around it?

Hey. I’m just now seeing this, I don’t know what is going on, but I will look into it. The files for the game are all there, so it’s got to be another issue.

Yeah i also noticed that all the files are there so i assumed it was some error or something,anyways i hope you can fix it since i cant find this game anywhere else I am so sorry. Somehow I missed this comment.. Let me look into what’s going on. Maybe there’s an an issue with the build.. if it doesn’t work, happy to refund whatever you paid for this “pay what you want” game.

Posted a new version. Fixed a missing file that was making the game think it was the demo version. Give it a shot again..

Question: Is this the full, complete miniverse golf game?! At 99MB I would expect another partial game.

Yep.. It's the whole thing. The graphics/music on the original CD-ROM were uncompressed, so it shrunk nicely.

Windows 7, after starting turned screen black and it stayed that way until I restarted computer. Ctrl+Alt+Del didn't help. It's probably something to do with resolution.

I would totally recommend downloading it before you donate anything to make sure it works with your setup. This game hasn't be re-compiled since 2004 :)